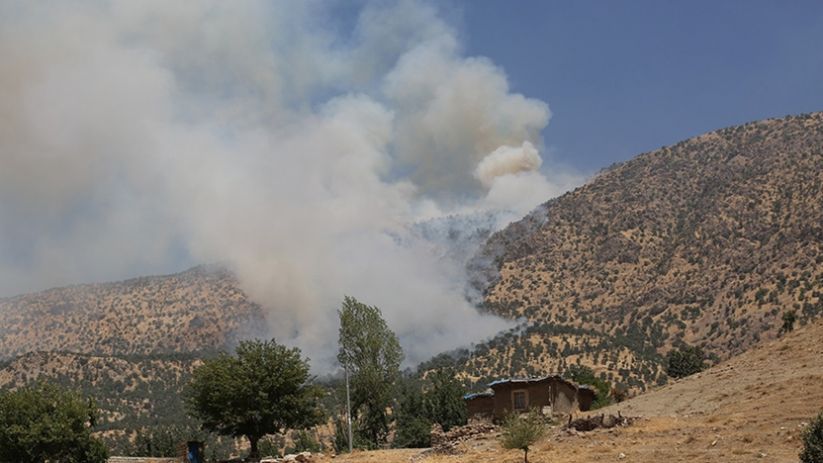 ANKARA - OPCW, where we asked their silence about the use of chemical weapons in the ongoing attacks in the Federated Kurdistan Region, said they were "monitoring" the issue. The OPCW showed that it failed to realize its alleged vision of "making the world safe from the threat of chemical warfare", leaving unanswered our question "How can progress be made in the investigation of war crimes if the states do not apply?"
The attacks launched on April 17 against Zap, Metîna and Avaşîn regions of the Federated Kurdistan Region with the partnership of Turkey's Kurdistan Democratic Party (KDP) have left their 6th month behind. During this time, it came to the fore that Turkey used many chemical weapons, which are considered war crimes against the region. According to the news in the Fırat News Agency (ANF), the People's Defense Center (HSM) said in a statement about the chemical weapons attacks that took place in the 6-month period that Turkey used banned bombs and chemical weapons 2,467 times between April 14 and October 14.  In the statement, it was stated that tactical nuclear, thermobaric, phosphorus and nerve gas bombs are among these weapons, and that 44 HPG and YJA STAR members have lost their lives in the attacks that have taken place so far.
17 HPG members lost their lives in chemical weapons attack
According to the latest HPG statement, 17 HPG members lost their lives as a result of a chemical weapon attack. In the images provided by ANF regarding this, it is seen that one of the 2 HPGs exposed to chemical weapons has memory loss and involuntary movements, while the other has discoloration in the hands and nails, loss of consciousness and difficulty in breathing. It was stated that the HPG people in these images died later.
OPCW silent
OPCW was established in 1997 as an “independent” for the implementation of the Chemical Weapons Convention, which remained open for signature until 29 April 1997, and for the pursuit of chemical weapons. The Organization for the Prohibition of Chemical Weapons (OPCW), which has the qualifications to prevent, research and investigate the use, supply, and transfer of chemical weapons, has not taken any action against the operations operated by the Turkey-KDP partnership in the Federated Kurdistan Region, despite all the calls for months.
Turkey approved in 1997
We asked OPCW officials, whom we tried to reach via mail, about their silence against the use of chemical weapons. Responding to our request for an interview, the organization refused the request for an interview and replied to our question, "We cannot investigate 'claims' unless the states parties request examination and investigation." Recalling that Turkey is one of the signatories of the convention, the organization said, “The Chemical Weapons Convention is an international agreement that aims to eliminate the entire category of weapons of mass destruction, and its field of activity and content is quite extensive. Countries that have signed and ratified the treaty are required to comply with all its provisions. Turkey ratified the Chemical Weapons Convention in 1997.”
They are 'watching' crimes against humanity
While the OPCW clearly gave the message that it would not "take action" on the war crime against humanity, it brought to mind the question "Who is the institution protecting?"
The logic of 'if there is a nation-state in war, it is taken as base'
Regarding the images of chemical weapons in the Federated Kurdistan Region, OPCW said in an email: For several years, the OPCW Technical Secretariat has been monitoring the situation in this region regarding claims or allegations of use of chemical weapons. The Secretariat has received neither substantiated information of alleged use of chemical weapons, nor requests related to such allegations from any State Party to the Chemical Weapons Convention. Under the Chemical Weapons Convention, the OPCW Technical Secretariat remains ready to assist any State Party – upon its request – in case of use, or threat of use of chemical weapons.
With this answer, the organization admitted that it would not help the people on the other side of the war, who were exposed to all kinds of inhuman practices, unless the state was there.
Left our question unanswered
OPCW left unanswered our question, “Do you not take the initiative in the face of such a claim, because if the allegations are true and the states do not apply, how can progress be made in the investigation of war crimes”, and showed the contractual obligations on their website.