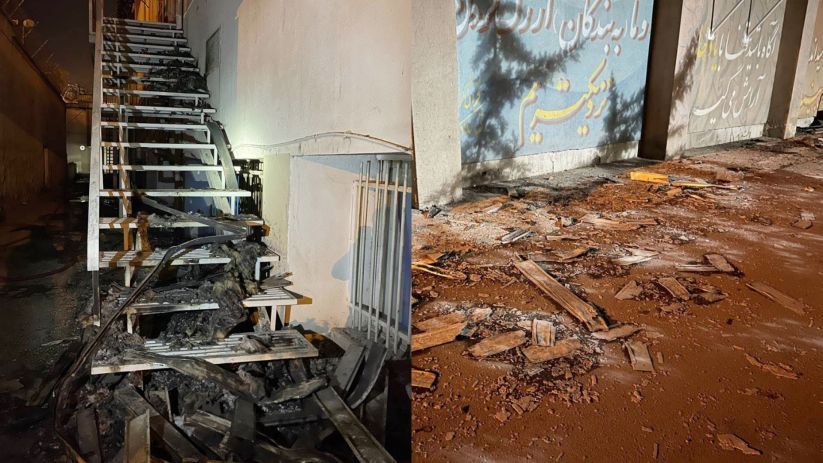 ANKARA - According to the news on the Iran International page, 4 prisoners lost their lives and 8 people were injured, according to some sources, in the intervention against Evin Prison, where political prisoners and journalists are held. It is stated that the prisoners started resistance In Tabriz and Sine Prison.
A fire broke out in the evening hours in Evin Prison, in Tehran, Iran, where political prisoners were held. Iranian journalists, who shared on their digital media accounts, pointed out that the fire was related to the ongoing protests and claimed that the regime burned the prison in order to "get rid of" political prisoners.
Speaking to the Iranian state channel, one of the officials said that the fire and the situation in the prison were under control, while the photos and video footage shared by the public from their digital accounts showed that the fire was continuing.
In some of the videos shared, the sounds of gunfire and explosions were heard, while in others, the anti-regime slogan "Death to the dictator" was heard by the people heading towards the prison.
While the connection of the fire in the prison with the actions that started after Jîna Emini was murdered by the "morality police" is not clear, Iranian journalists and activists claimed that "the fire was started to support protests, or the government burned down the prison to get rid of political prisoners".
Those arrested during the protests are in Evin Prison
However, the slogans chanted by the people against the oppressive regime in front of the prison showed the fact that they could be related to the Jîna protests, while keeping all the demonstrators arrested in the last four weeks in Evin Prison strengthens the allegations that there is a conspiracy of the regime.
The claim that 4 prisoners lost their lives
According to the news on the Iranian International page, 4 prisoners lost their lives in the intervention of the Iranian regime forces in the prison. It is stated that the prisoners started protests in Tabriz and Sine Prison as well. State media, citing an official who blamed and targeted "criminal elements" for the fire, claimed that the Jîna actions had no connection with the fire. 8 people were injured, the state-controlled IRNA News agency said.
In a statement from inside the prison, Tehran's governor also claimed to state television that a riot broke out in a wing of the prison where petty criminals were housed, and that the situation had calmed down completely.
Torture was seen in prison
Evin Prison has long been criticized by western human rights groups for its treatment of prisoners. Human Rights Watch said prison authorities threatened torture and indefinite imprisonment, as well as lengthy interrogations and refusing to provide medical treatment for sick detainees.
So much so that a group of hackers calling themselves Edalat-e Ali (Ali's Justice) released videos showing security camera footage leaked from Evin Prison in August last year showing guards torturing and mistreating inmates.