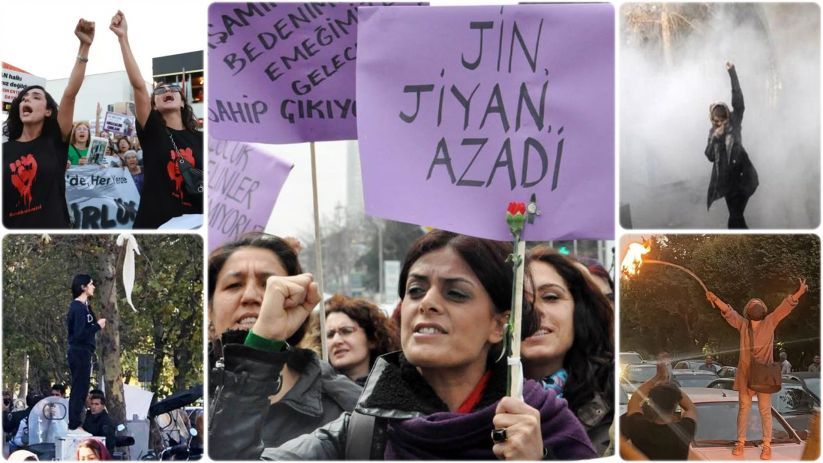 NEWS CENTER - Zahra Bagherishad, Iranian journalist, and intersectional feminist, noted that for protests in Iran “This is the biggest feminist revolution in the world!”
After the torture and murder of Jîna Mahsa Amini on September 17 by the "morality police" in Iran, the protests the regime continue. The exact number of those who lost their lives in the ongoing protests is not clear. Local sources state that almost 76 was murdered in the protests. Meanwhile, many women journalists, actors and actresses have been arrested by the regime. Also, on September 30, the Iranian government brutally killed protestors in Baluchistan - one of the marginalized provinces of the country - and killed nearly 70 people in one day.
Zahra Bagherishad, journalist, and intersectional feminist commented on the Iranian regime's years of oppression of women and the murder of Jîna.
‘Don't forget that Mahsa was a Kurdish woman’
Zahra said, "Don't forget Jîna was a Kurdish woman " and she added, “Women in Iran have been always harmed from gender discrimination and violence against women , mandatory hijab as one of the most violent forms of gender oppression has been suffering women for more than forty years. But killing Mahsa is the most brutal form of this oppression and gender-based violence which is also a systematic violence against women from the Islamic Republic. Moreover, don't forget that Mahsa was a Kurdish woman. Kurdish women and other oppressed ethnic groups in Iran suffer from multiple discrimination."
'The struggle has been going on since 1979'
Expressing that the Iranian regime, which establishes gender discrimination with systematic and discrimination-based violence against women and LGBTQ+, constitutes the basis of patriarchy, Zahra said that women have been protesting gender discrimination since 1979. “Protest against the rules of the Islamic Republic and against the mandatory wearing of hijab by women took place on the 1979, after that a wide range of popular associations and organizations were formed throughout Iran and outside Iran advancing the issue of women's rights and feminist demands. Besides this, there have always been independent and individual feminist activism. Also, the Iranian feminist community is fully familiar with the online platform, which plays an essential role in the fourth wave of feminism and has a lot of support from many online campaigns, since many women have suffered and been injured by the moral police in these years including trauma and physical damages. Such that, the lawyer of the Mahsa’s family, who has started the process of complaining about the moral police and Mahsa's killers, recently expressed his disappointment about the success in this case and he said that this complaint will not be successful” Zahra said.
‘Denial is one of the forms of violence’
Emphasizing that all the officials of the Iranian Islamic Regime have been lying about the rights of women and the LGBTQ+ community from past to present, Zahra said, “The former president of Iran, Ahmadinejad, also claimed that we do not have homosexuals in Iran! What big lies! The aim of these authorities is to deny the issue of women and LGBTQ+ community, denial is one of the forms of violence.”
'Women don't need a leader from abroad'
Zahra used the following expressions, “I strongly believe that the women's movement inside Iran is very independent and women in Iran's civil society have feminist awareness. They do not need advisers and leaders from abroad. The slogan of this recent movement "Woman, Life, Freedom" is a progressive slogan that has even impressed the feminists from all the world. Therefore, Iranian women are more advanced in the fight against the mandatory hijab than many European and Western women politicians. Female politicians accept the mandatory hijab in diplomatic meetings due to political considerations because they have to choose to wear a hijab based on a political consideration. Precisely Iranian women protest why they should not have the right to choose about the hijab. However, in this way, it will be positive if female politicians, journalists, and other well-known figures in other countries - with any belief - by rejecting the mandatory hijab in political meetings and so on support Iranian women."
Arrests in Kurdistan region
Zahra, stating that at least 52 women activists were arrested in Iran's Kurdistan region by violently suppressing the latest protests, reacted to the arrests. Zahra, “Nilufar Hamedi, the female journalist who reported the news of Mahsa's murder, has been arrested and is in solitary confinement. Arresting the journalists, feminist activists, and even male and female actors who have spoken in support of these protests continues.”
This is the biggest feminist revolution in the world!’
Zahra finished her words by saying, “This is the biggest feminist revolution in the world! Mandatory hijab has been one of the most important and main areas of Iranian women's struggle, but it is not their only desire. The issue is the fight against gender discrimination and systematic violence against women in a patriarchal system. Yes, Iranian women are fighting against the whole of this patriarchal system, the slogan "Woman, Life, Freedom" represents this desire. But the fight against the mandatory hijab is also a big step in this way, because it is directly related to the fight for the freedom of expression and the right to choose about their body.”
Intersectional feminism: It defines intersectionality as “the complex, cumulative manner in which the effects of different forms of discrimination combine, overlap, or intersect”. Put simply, it means that different forms of discrimination don’t exist in a vacuum – for those who embody different marginalised identities, these often overlap and amplify each other to create a unique experience of discrimination that is more than just the sum of its parts. It’s a critical concept, but one that can sometimes be hard to wrap your head around – particularly when we consider that the term can mean different things to different people across different contexts.