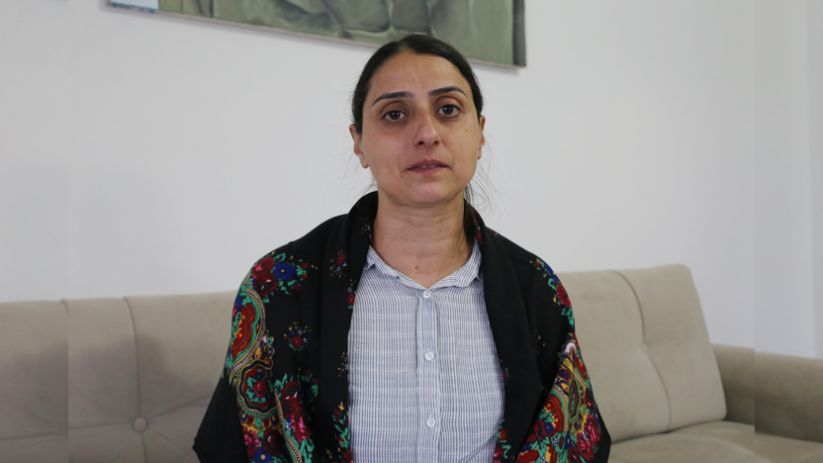 Feleknas Uca: Attack on Shengal is a war crime

DİYARBAKIR - HDP MP Feleknas Uca, who evaluated Turkey’s attacks on Shengal as a ‘’war crime’’, stated that the Shengal is wanted to be emptied with one after another attacks.
Turkey carried out an airstrike on Xanesor region of Shengal with a drone on December 7. While the vehicle of Shengal Autonomous Administration Executive Council Co-chair Merwan Bedel was targeted in the attack, Merwan Bedel was killed as a result of the attack. The two children who were with him in the vehicle survived. On December 11, Turkish warplanes bombed the Xanesor People’s Assembly. As a result of the bombing, the building was completely destroyed, and there was no loss of life as there was no one in the building at that hour.
While trying to reflect the attack in the mainstream media that the two children who were with Merwan Bedel as Merwan’s bodyguards, the photo of Peoples’ Democratic Party (HDP) MP Feleknas Uca with Merwan Bedel, taken in Shengal, was given.
HDP Batman MP Feleknas Uca evaluated the recent attacks on Shengal and the news which were reflected differently regarding the killing of Merwan Bedel.
‘Everyone in the photo was killed’
Reminding the attacks carried out by ISIS against Shengal in 2014, Feleknas stated that after the attacks, no one embraced Shengal. Noting that a different policy has been implemented on Shengal since then, Feleknas said, ‘’On the one hand, the United Nations (UN), on the one hand, the USA, on the one hand, Iran and Turkey, on the other hand, coalition forces are carrying out a project to fight ISIS in Iraq. The only reason Shengal was in this situation was that it was unorganized. The protection and defense of Shengal should be from its own people. This request has been voiced for years. Since then, the Turkish state has been trying to do what ISIS could not do. There were three massive attacks on Shengal by Turkey this year. As HDP, we went to Shengal on August 3 for Shengal commemoration. We held the commemoration there together with Shengal defense forces. All of the people in the photo we took together were killed’’.
‘He was bombed with his children’
Reminding that they have expressed this situation in the Parliament in the past years, Feleknas said, ‘’We said also in that time. However, it has passed exactly one year. Instead of dressing the wounds of Shengal, they are taking decisions about the administration of Shengal. Just a few weeks ago, Seyit Hesen was martyred. However, Seyit Hesen was one of the defenders of Shengal’s defense. This was not coincidence. That day, the Iraq Prime Minister was going to Shengal and had a meeting. The other day, Shengal hospital was bombed. Then the people who went to rescue them were bombed. All those in the hospital were civilians. They were killed for the sake of interests. During the election period, they wanted to enter Shengal with tanks and heavy weapons, using the election as an excuse. However, the people of Shengal did not come to these games. Lastly, Merwan Bedel and his two children were bombed inside the vehicle’’.
‘ISIS members wanted to be placed around Shengal’
Feleknas, who said that it is necessary to read the attacks well, noted that ISIS gangs from Hol Camp were brought to the around of Shengal in the past days and wanted to be placed. ‘’The people of Shengal reacted to this situation and did not allow it. Merwan Bedel, who wanted to hold talks based on this situation, was killed by bombing. These situations are not independent from each other. Shengal is wanted to be emptied. We have visited Shengal before. Shengal is strong enough to govern itself. And we believe that. I shared the photo of Merwan Bedel, who was killed in Shengal. However, the mainstream media shared that photo as if they had only just reached it. Turkey declared Merwan Bedel a terrorist. However, he was not a terrorist, he was a person who defended his own people, this is how it should be known. There has been no attack on Turkey by Shengal,’’ Feleknas said.
‘Every stone of it was created with heroicness’
Emphasizing that the attacks on Shengal are ‘’war crimes’’, Feleknas stated that Yazidis will not be defenseless against this. Underlining that Turkey’s bombing of Shengal is connected with the attacks in other regions, Feleknas said, ‘’My condolences to Merwan Bedel’s family. A great loss. The Yazidi people have seen great wounds in the last few years. They were faced with different war concepts. Every stone of Shengal was washed with blood. Every stone of it was created with heroicness. There is a woman’s scream in every stone. It takes months and years to talk about those heroicnesses. Women liberated from ISIS gangs trained themselves and defended Shengal. The Yazidi people are wanted to be left defenseless. We exist, we will defend ourselves. We will close wounds with struggle. This was also the word of Seyit Hesen and Merwan Bedel. We will try to fulfill this word. Once again, my condolences to the Yazidi people’’.