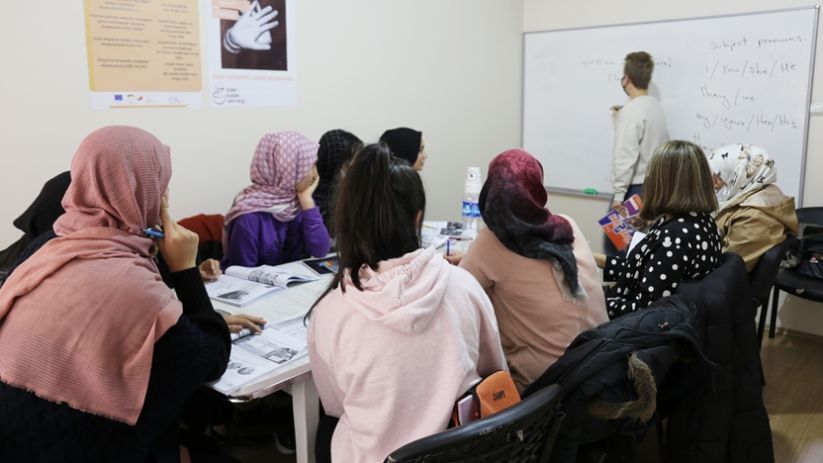 Hikmet Tunç
VAN - A language course was started for refugee women and children who migrated from their homeland to Van due to war and male violence. With the course initiated by the STAR Women’s Association, women learn a language in order to adapt to life more easily and also get gender equality training.
Thousands of people migrate every year due to the war in the Middle East. Many refugees, especially women and children, who migrate to different countries as a result of war and male violence, are subject to many rights violations in these countries. Refugees, who are exposed to racist, sexist and many other discriminatory practices, also have difficulty with language.
Language training for refugees
In Van, where refugees frequently come and settle due to being a border city, and which is also on the transit route, STAR Women’s Association started training specifically for the language problem experienced by refugee women and girls. With the training initiated for those coming from Afghanistan and Iran, it is aimed to enable them to adapt to life in the cities they live in more easily.
The association, which has been fighting against all kinds of violence against women locally for almost two years, provides language courses in the city where many refugees live. One of the members of the association, Sevgi Özdinç, who stated that they had received applications for refugee women and girls before and carried out works, said that they provided language courses in this context.
Gender equality training is also provided
Stating that they have developed a project for women and girls in the city, which receives intense immigration, Sevgi noted that they opened workshops after the project they submitted to the Embassy of France was approved. Stating that they provide a language course all day one day a week, Sevgi said, ‘’We started the training with a group of about 100 people. In addition to language training, we also provide training on gender roles, women’s rights and refugee rights’’.
‘Each of them has a different story’
Emphasizing that refugees face with many problems, Sevgi said, ‘’They face serious traumas, particularly sexual harassment, economic problems, problems of adapting to a new city. First of all, we want to get to know after language training and after experiencing an atmosphere of trust. We know that each of the women has their own stories, there are problems they are exposed to. After the atmosphere of trust is established, by listening to their stories we aim to make the necessary guidances in line with their demands as an association’’.
Nearly 200 applications in two years
Saying that they want to respond to the demands of refugees and all women locally, Sevgi said, ‘’We want to respond to all their demands in social, psychological, cultural and economic terms. During the two years we have been operating with limited resources, we received approximately 200 applications. We, together with our volunteer friends, are searching for a solution against violence 7-24’’.
‘Struggle and solidarity will empower us’
Noting that the trustees appointed to the municipalities of the city for two terms have eliminated the networks that fight violence against women, Sevgi said, ‘’Women’s centers, shelter, cultural, social activities and trainings operating within the municipality have all been closed. Women’s associations conducting an activity in the city were closed with the Decree-Law. Therefore, the mechanisms that women can apply to have been eliminated. Struggle and solidarity will empower us. We are developing a policy on women. In this sense, we worked mainly on projects. But first of all, we fight violence against women’’.
‘I had a hard time about the freedoms in Van’
Beger Şexebur, who came to Van from Serdeştî, Iran, about five years ago, said that she started the association’s course with her daughter a week ago. Stating that she was pleased with the course she attended to improve the English spoken language, Beger said, ‘’I had many problems about freedoms in Iran. In Van, where I came to live a humanely life, the people treated me very well. I got married here. I had a daughter. But here, too, I had difficulties about the freedoms again. Because women’s freedoms are limited in Middle Eastern countries. In order to avoid language problems, I am trying to learn English in the course’’.
‘My friends increased with the language course’
Ezime Xızirniya, who stated that she came to Van from the city of Mahabad in Iran in 2014, stated that she had to immigrate due to the problems she experienced in her country. Expressing that she came to the course with her friends, Ezime said, ‘’When we immigrate to another country, we find it difficult because we do not know the language. I know Kurdish, the people here also speak Kurdish. I am very lucky for that. But I know that I will have difficulties when I go to Europe or go to a different city in Turkey. I would also like to thank the members of the association. Because they brought us together in such a workshop. I am very pleased’’.