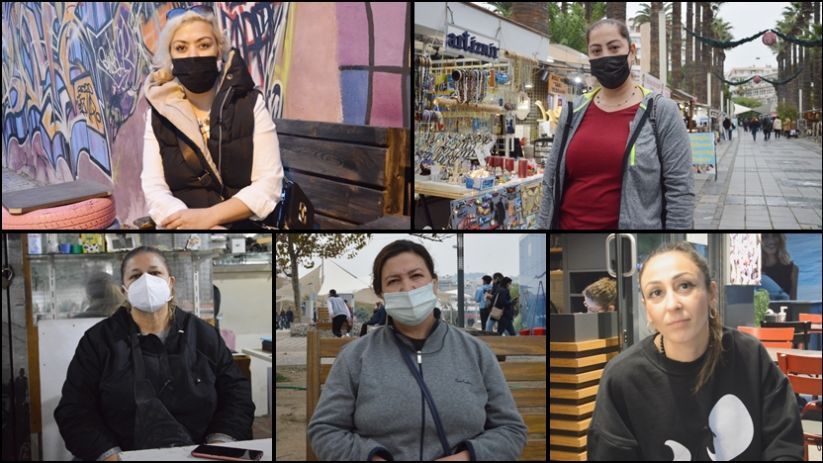 Melike Aydın
IZMIR - Expressing that the share allocated to women in the budget discussions will not be enough to combat violence against women, the women said that the budget should be allocated to women’s institutions and the prevention of war.
The 2022 budget proposal of the Ministry of Family and Social Services was determined as 66.131.543.000 TR. Each woman’s share of the budget falls 22.5 TR, and most of the budget includes personnel expenses. The budget allocated by the Ministry for 2022 for the ‘’struggle against poverty and social aid’’ program is 39.115.645.000 TR. 15.715.000 of the allocated budget was allocated to personnel expenses, 2.261.000 to social security institution state premium expenses, 36.325.000 to purchase of goods and services expenses, 39.060.844.000 to current transfers, 500.000 TR to financial expenses.
397.505.000 of the 590.687.000 TR allocated for the ‘’Women’s empowerment’’ program was also allocated to personnel expenses. Stating that the budget allocated to women is not sufficient to ensure gender equality, the government does not have a program especially regarding combating violence against women, the women demand that the establishment of a Ministry of Women and the budget to be based on gender equality.
‘More budget should have been allocated for women’
Özüm Korkmaz, halva producer, stated that women and children are not protected and their economic needs are not met. ‘’If they wanted to do something, if they cared, they could have allocated a larger budget,” Özüm said. She emphasized that a large part of the budget should be allocated to women first, and then to education and health. Özüm continued, ‘’The social state should prioritize its people. It should start with the segment that needs it most first. Women cannot benefit much from the budget, so they cannot protect themselves. It is not difficult to allocate more shares from the budget’’.
‘Women and family are separate issues’
Reminding that the Ministry of Family, Labor and Social Services was established in 2011 instead of the Ministry of Women and Family Affairs, Deniz Türkkan stated that the establishment of the Ministry of Family and Social Services was not correct. Deniz said, ‘’The two are different, the woman is separate, the family is a separate issue’’. She continued, ‘’Especially women and children have lost their importance in our country. The 2022 budget should have been evaluated in more detail. I would particularly wanted that the improvement the conditions in the women’s shelters. There are also children there. The priority in the budget should have been women and children’’.
‘Expenditure must be made to end the war’
Expressing that there are many problems due to wars around the world and that epidemics such as coronavirus will increase, Deniz said, ‘’The budget should be transferred to the education, tourism, women, and social organizations for society, instead of allocating it to weapons. If an expenditure is to be made, expenditure must be made to end the war. Money should be spent on education, health, and tourism’’.
‘It must first be ensured that women stands on their own feet’
Retired trades Birben Özel, who stated that the budget allocated to women is at a ridiculous level in a process where foreign currency is increasing day by day, said, ‘’Are they dreaming? The budget should be spent primarily on women’s education. Women should be educated first in society. There are women’s shelters, but shelters are not liberation for women. Solutions that will enable women to stand on their own feet need to be implemented. Women cannot stay in shelters for long. Then she falls under her spouse’s yoke or face with other problems. For this reason, it must first be ensured that women stands on their own feet’’.
‘More support should be provided to women’s institutions’
Jewelery designer Gülşah Tanay stated that the budget allocated to women is insufficient and said, ‘’Men commit violence, more sanctions should be applied to men. In the budget, especially women’s shelters and women’s institutions need to be supported more’’.
‘Money is spent on unnecessary things’
Computer engineer Su Ata said, ‘’While no money is allocated for anything that needs to be spent in this country, money is distributed to everything that is unnecessary. In Turkey, you already start from behind as a woman. I am a believer, but it is unnecessary to have three mosques in a neighborhood. They can spend the money on other things’’.
‘I want insurance and salary’
A domestic worker also expressed her reaction to the budget with these words, ‘’If our spouse gives money, we have money. I am a mother of three children. We have separate duties as spouses, we have separate duties as mothers…I do not work, but the work we do at home is heavier than employees. I want insurance and salary. Working women hire a careworker, but who will pay us?’’