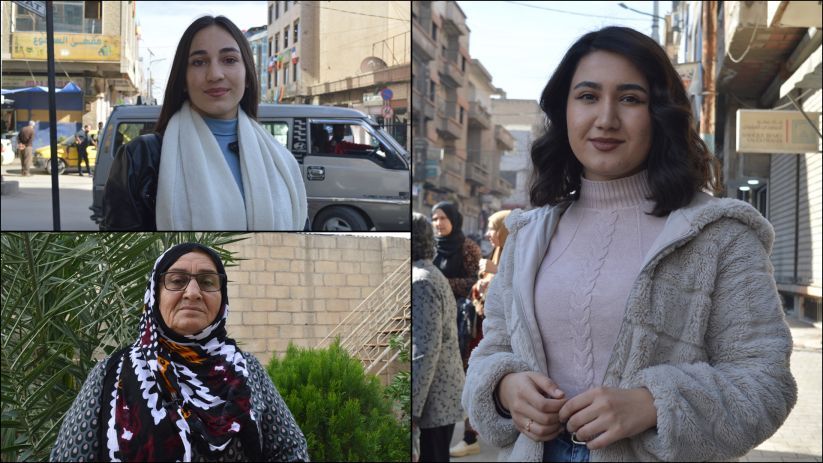 QAMIŞLO - Women living in Qamishlo called on the Kurdish people and the world to embrace the Rojava Revolution, stating that Turkey attacked Northern and Eastern Syria because it did not accept the defeat of ISIS and that they would resist it.
As Turkey's attacks against Northern and Eastern Syria continue, the reactions are increasing. In many parts of the world, especially in Kurdistan, Kurds and their friends take to the streets to react to the attacks, and calls are made to international institutions to fulfill their responsibilities to stop Turkey's attacks.
Women living in Qamishlo also reacted to the attacks and demanded that they be stopped as soon as possible.
'When Turkey fails in one place, it attacks another'
Necah Gulo from the Qamishlo Martyrs' Families Institution condemned Turkey's attacks and stated that Turkey wanted to destroy the Kurdish people with these attacks. Stating that they will fight against the attacks and make their voices heard all over the world, Necah said: “The invading Turkish state is fascist and therefore it is attacking us and the freedom fighters. Since the Turkish state could not fight against freedom fighters in Southern Kurdistan and could not realize its plans, it started to attack with planes and artillery in Rojava Kurdistan. The aim of the Turkish state is to destroy the Kurds. When the Turkish state breaks down in one place and fails to succeed, it begins to attack another side. That's why it attacks villages and cities."
'The Turkish state did not accept the defeat of the gangs'
Condemning the silence of international institutions and states, Necah stated that they did not ask for help from them, but that they had to fulfill their responsibilities. Necah said that Turkey murdered women and children in front of the whole world, and then wanted to carry out a massacre, and continued, "The end of Tayyip Erdogan is coming. However, he wants to prolong the life of his power with this war. The Turkish state claims to be fighting "terrorism". However, it feeds terrorism in its own country and attacks us in cooperation with gangs. The Turkish state did not accept the defeat of the gangs and today it wants to avenge these gangs. The Turkish state's actions against the guerrillas in Southern Kurdistan, even the burning of its own soldiers, and its attacks on the people in Rojava Kurdistan, reveal the level of brutality."
'The Turkish state should be prosecuted'
Nevah added, “The Turkish state should be prosecuted for the terror and brutality it has been using against the Kurds for years. We grew up with Leader Apo's philosophy and thoughts, so we are Leader Apo's students. Today we have 12 thousand martyrs. Those martyrs sacrificed their lives to protect our lands from gangs and enemies. The whole world is blind, deaf and dumb against this massacre and brutality of the Turkish state. But we will resist all attacks. We will keep our martyrs in our hearts with the slogan 'Berxwedan jiyan e' and will continue our struggle against attacks."
'As young people, we will do whatever it takes for our lands'
Rojava University student Ara İsmail Ehmed also stated that they do not accept the silence of the world against Turkey's attacks and said that as young people, they will do whatever it takes to protect their own lands. Ara said, “I condemn the attacks of the Turkish state. The Turkish state does not want us to live in peace. It attacks with planes. Our people are being killed in attacks. As young people, our call to the Kurdish people is to stand up in the four parts of Kurdistan and take care of their lands and countries. We will defend our lands until the end."
'Turkey is afraid of the will of the Kurdish people'
A woman named Merdin Şemsedin stated that Turkey was afraid of the will of the Kurdish people, and that was why they attacked Northern and Eastern Syria. Merdin, demanding that the Kurdish people and the whole world take care of the Rojava Revolution, said: “On November 19, the invading Turkish state attacked Northern and Eastern Syria. The Turkish state could not accept the defeat of ISIS and that is why they are attacking us now. We, the Kurdish people, have the will and we will resist their planes, tanks and artillery. We are in the footsteps of our martyrs. The four parts of Kurdistan and the world should not remain silent. Our people must stand up.”