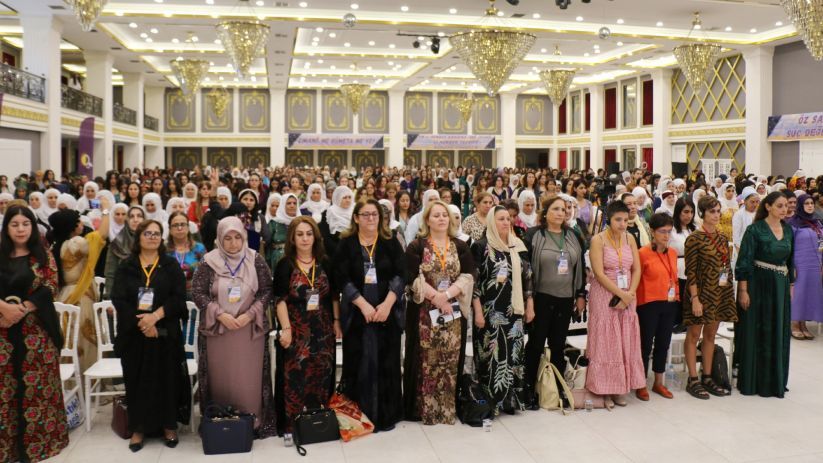 From the TJA conference: Women are destroying your power

BATMAN - While the murdered women were commemorated at the conference held by TJA, it was emphasized that women would never bow to the male-dominated mentality. At the conference where Jîna was commemorated, the message "Those who murdered Jîna should know that women are destroying your power and regime".
Tevgera Jinên Azad's (TJA) 4th Conference continues on its 2nd day in a conference hall in Batman with the slogan "Emli dijî fascismê bi biryar û di azadiyê de bi insist". While 700 delegates from all over Turkey and the region attended the conference organized by TJA with the aim of "building a democratic, ecological, women's libertarian life under the leadership of women'', Peoples' Democratic Party (HDP) Co-Chair Pervin Buldan also attended the conference. Banners ``Self-defense is a right, not a crime", "Long live the universal women's struggle", "Jin jiyan azadi", "Femicide is political'', "This is a time for women's freedom, from rebellion to resistance to freedom", and TJA's banners were hung in the hall where the conference took place. The women, who came to the hall from the early hours of the morning, danced halay in their colorful national costumes accompanied by music and zılgıts. Women often chanted “Jin jiyan azadi”, “Biji berxwedana zindanan”, “Biji Serok Apo” and “Biji berxwedana jinan”.
'The conference is one of the areas of resistance'
TJA activist Zeynep Boğa, who made the opening speech after the council election, stated that women's resistance has come to life in many parts of the world, women are leading the resistance and the Middle East is one of these resistance areas. Zeynep said, “The resistance that started after the murder of Aminî is a resistance against the understanding that sees women as slaves. This is the resistance of the years. Women are resisting everywhere. It resists in dungeons, on the streets, in every aspect of life. This conference is one of our resistance areas. The women who come here are the pioneers of resistance and freedom. With this awareness, we are organizing the conference. Greetings to the women who flocked here from 4 parts of Kurdistan and many cities for strong participation.”
After the speech, there was a cine-vision screening about the struggle of women.
'We will resist your rape culture '
Afterwards, TJA activist Berivan Ertel, speaking on behalf of TJA, started her speech by saluting women from everywhere and commemorating the murdered Jîna Mahsa Aminî. "Those who murdered Jîna should know that women are destroying your power and regime," said and adding, "Women will destroy this system of yours. We will resist your rape culture and we will never bow down. We know that the five-thousand-year-old male-dominated power against women, who defend society against racism and all kinds of policies, is in a hurry to lose. The male-dominated system knows that it will come to an end, so it has waged a direct war on the women's freedom struggle.”
'Isolation is insoluble'
Berivan made the following statements in the continuation of her speech:
“The isolation of the Kurdish People's Leader, who has made a new historic breakthrough against the male-dominated paradigm, is unacceptable. Isolation policies are deadlock, deepening of war, poverty, crisis, chaos, and women are most affected by this. We have struggled against these policies and will continue to do so. The AKP and MHP government are recklessly attacking with their misogynistic policies. The sexist attacks on the female body are increasing day by day. The deepening war manifests itself as special war policies in Kurdistan. Again, the depreciation of young people and young women is widespread. You are the murderer of İpek Er you murdered in Batman and Sakine Kültür you murdered in Silopi, Gülistan Doku you lost in Dersim and Garibe Gezer you murdered in prison. We are the comrades of the unyielding. We are the friends of Semra Güzel, whom you try to keep her head down, and Leyla Güven, whom you have imprisoned.”
We draw our strength from our freedom
Emine Şenyaşar's watch is a women's watch. Let's take care of the conscience attacks of mothers. Women in Afghanistan, who are fighting against this persecution by staying in their countries against the Taliban mentality, create hope. The Istanbul Convention salutes the women who are fighting for equal representation. As the women's movement, we derive our strength from our organization and our just struggle. We have never been confined to the borders drawn by the male-dominated state. Resistance is our struggle identity. The woman's struggle will win in the face of all oppression. The Kurdish women's movement, which continues its struggle against the exploitation of the nation-state, against the massacre of women and ecology, and the TJA, which fights for the freedom of society and women, will continue to fight.”
After the speech, the photos of the murdered women in Iran and the country were shown in the hall with the slogan "Jin jiyan azadi".
The conference continues with speeches.