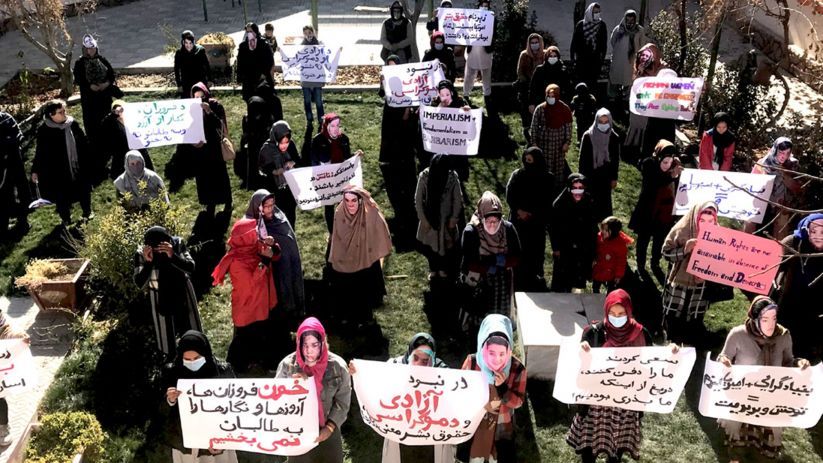 RAWA's women 'Will never step back'

"Europe has always viewed immigration as a source of human labour due to their own declining population. We today witness a deep discrimination amongst the Ukrainian refugees and others. Our women send letters around the world begging for help. While most of the women in the country do not even have access to basic needs, they cannot even imagine leaving the small villages, let alone leaving the country.”

*There is data that those who don't want to be on the side of the Taliban migrate, but Europe's policies on refugees are clear, do women get involved in this forced migration for a better life?
Speaking about closing doors to refugees, Europe’s policies have always been quite discriminating when it comes to immigrants from Afghanistan, Syria, Libya, and other poor African countries. They have always viewed immigration as a source of human labour due to their own declining population. We today witness a deep discrimination amongst the Ukrainian refugees and others where the cases of tens and thousands of Afghans have been kept on hold to cater to the Ukrainians.
In 2020, Head of UNAMA Deborah Lyons called Afghanistan “one of the worst places in the world to be a woman, and one of the worst to be a child” due to widespread insecurity, rapes, kidnappings, killings, domestic violence, forced marriages and suicides. Now that the Taliban are back in power, the women’s situation has even worsened, and the wave of forced migrations are at an all-time high. Before, there were immigrants to Pakistan or Iran in search of a better earning or the extreme insecurity in their villages forced them to move and they often lived in refugee camps in dire conditions. These were mostly men who often left their big families behind in Afghanistan and sent back their meagre income by doing hard labour or odd jobs. During the airport tragedy last year and the so-called rescue flights by the US and its allies, many educated, skilled and bright individuals including women left the country and it was called a ‘brain drain’. Quite obviously, women are included in this forced migration and most of such young women and girls wish to leave Afghanistan. The ones who could not leave, send pleading letters to people, organizations, and governments all over the world to help them escape.
However, these women form a very small percentage of the female population of Afghanistan. Majority of them live in provinces, under horrid living conditions where they do not even have access to the necessities of life such as clean drinking water, healthcare, or education. These women never even imagined leaving their small village, let alone leaving the country. They continue to burn in an inferno of violence and injustice where their roles have been reduced to a child-bearing machine and domestic worker. Previously, some aid agencies and government ministries had small centres where women could file a complaint against an abusive husband or in-laws or seek divorce, legal assistance, or psychological counselling. Now the Taliban have banned all kinds of such activities and projects and even raided and tortured women living in safe shelters.

"Turkey has always played a very treacherous role in Afghan politics. After Pakistan and Iran, Turkey was instrumental in bringing the Taliban into power and as a NATO member, it has only supported and nurtured Islamic fundamentalism. Being closely tied both culturally and religiously, they opened institutions and businesses for their own benefit all over the country. So much so that they did not even hesitate to use ISIS gangs against the Kurds.”

*The US (NATO) forces left the Afghan people to the fate of the Taliban, and many countries began to meet with the Taliban, even a delegation visited Turkey in October last year. How do you evaluate this attitude of Turkey and other countries towards the Taliban? Do you feel left alone in this struggle on the international arena?
Turkey has always played a very treacherous role in Afghan politics, particularly in these last 20 years. After Pakistan and Iran, Turkey was instrumental in bringing the Taliban into power and as a NATO member, it has only supported and nurtured Islamic fundamentalism. Being closely tied both culturally and religiously, they have opened schools, NGOs, charity organisations and businesses all over the country for their own benefits and have largely supported Dostum by funding his companies, TV stations and political activities. They have provided and continue to provide a haven for all the Jehadi fundamentalists and criminals particularly the Northern Alliance. Recently, a meeting was held in Turkey by all these criminal former government officials, and it would have been impossible without the Turkish government’s backing.
In our opinion, Erdogan is a fascist, fundamentalist and misogynist himself who has used ISIS against the Kurdish freedom-fighters and continues suppressing all progressive, democratic, and secular organizations and movements in Turkey. Furthermore, their inhuman treatment of Afghan immigrants on their borders is condemnable and are no different from the theocratic regime of Iran. These young boys and men often embark on long and extremely dangerous journeys just to support their families back home, but they are tortured, starved, jailed, raped and looted.
We have never enjoyed a wide support, but we are very proud of always having the solidarity of freedom-loving and peace-loving people from all over the world. This is mainly because most of the radical and progressive movements and individuals in Afghanistan including RAWA have largely been silenced and even killed since the Russian invasion in 1979. We are also critical of the US imperialism and its war-mongering policies and crimes in Afghanistan, Iraq, Syria, Libya etc therefore unfortunately we are often censored by the international media. The pro-government media of the US and its allies has always been pro-state and broadcast what serves its interests. Afghan women are always shown as victims that need someone to rescue them rather than recognizing them as a powerful, united front against the fundamentalist forces and supporting them.

“Women continue their struggle by spraying their strongest perfumes. This is the only solution to a better future for Afghanistan: for the people to unite, mobilize and fight against all kinds of fundamentalism and their foreign masters. We believe in the incredible potential of the Afghan woman who has nothing to lose but her chains. “

*If women will continue their fight against the Taliban, what will be the next step? May you get your gains back?
Our founder and leader Meena said: “Afghan women are like sleeping lions, once aroused, we react with the same courage and charisma as lions”. Today, the only silver lining in this dark Taliban rule are the numerous uprisings of women in many parts of Afghanistan. We witness that Afghan women can no longer be enslaved by the barbaric and reactionary repression of the Taliban. Women are demanding for their basic rights to be free, to work and to seek an education. We believe in the incredible potential of the Afghan woman who has nothing to lose but her chains. However, we are faced with a much powerful enemy which is the Taliban funded by the US, Pakistan, Iran, and Saudi Arabia. They will get back their rights, but it will be a long, tumultuous, and tortuous path to freedom and liberty. This is where we call out for the solidarity and support of the freedom-loving people all over the world to support us in the arduous struggle for a free, democratic, and secular Afghanistan.
The most effective support is to show solidarity with liberal, democratic, and secular organizations. It is important to raise awareness everywhere, to condemn those responsible for the humanitarian crisis that the Afghan people are in, and to provide humanitarian aid for basic vital needs when financial aid is needed.
The duty of the international community all over the world is to never let the attention dim. There was a lot of hype in the media when the Taliban came in power but then we noticed that it died down and people slowly forgot about Afghanistan. This is what the pro-government media does, they always look for sensationalizing the news from all over the world to always keep people distracted, confused, and misinformed.
Since the media including social media and freedom of speech has largely been silenced in Afghanistan, we need to convey the message of the people and raise awareness about the real situation and truth. We want the world to know that our women do not want to live under the dark rule of these brutal savages. They should not, under no condition, be recognized by any government.
Note: The real names of women who are members of RAWA are kept confidential for security reasons.