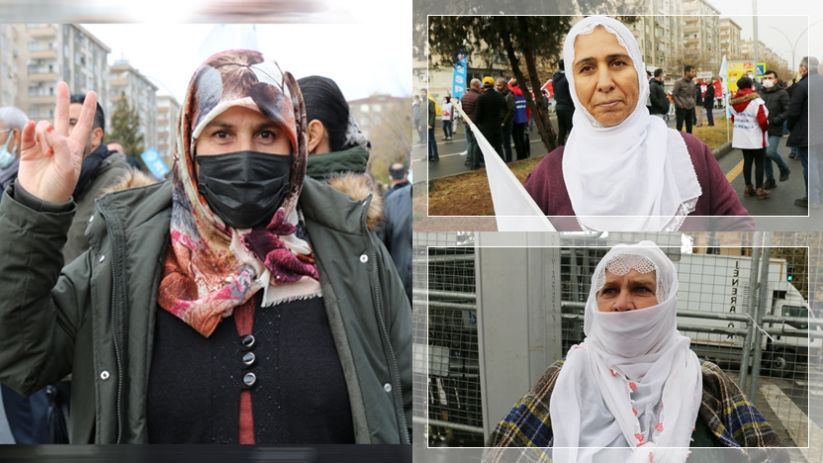 ‘Prisoners should be released before they die in prisons’

Derya Ren-Sema Çağlak
DİYARBAKIR - Speaking about the increasing rights violations and pressures in prisons, particularly sick prisoners, the women said, ‘’The most important human right is the right to health. However, this right is not provided to the prisoners. Prisoners are losing their lives because of this situation.’’
While the situation of sick prisoners in prisons in Turkey and the region is getting worse day by day, the pressures on the prisoners continue to increase. In the last two weeks, three of the sick prisoners, Abdulrezzak Şuyur in İzmir Şakran Prison, Halil Güneş in Diyarbakır D-Type Prison, and the sick prisoner Salih Tuğrul, who had a stroke in Siirt E-Type Prison and whose sentence was suspended, lost their lives.
On the other hand, Garibe Gezer in Kandıra No.1 F-Type Prison, Vedat Çem Erkmen, who was held in Tekirdağ No.2 F-Type Prison, and arrestee İlyas Demir, who was imprisoned in Bolu T-Type Prison, lost their lives suspiciously. While lawyers are not taken to the preliminary autopsy of the prisoners who lost their lives suspiciously, reports regarding the death of the prisoners cause question marks.
We handed the microphone to women from Diyarbakır on the subject. The women said that the oppressions on the prisoners should end as soon as possible and that the sick prisoners should be treated.
‘Prisoners are losing their lives’
Selva Taş, who said that her sibling and son are in prison, stated that her son was exiled from Kırıkkale Prison to Ankara Sincan Closed Prison two months ago. Expressing that her son has a heart condition, Selva said, ‘’Despite all the disease, they do not take him to the hospital. When we went to the visit, the belongings we took with us were not given. Now they do not give what we send with cargo. Nowhere in the world has not been seen that sick prisoners have been held in prison. Many prisoners are losing their lives because of their health problems. We do not accept this and we will always continue to stand by our prisoners. All the prisoners are our children. Their struggle is our struggle’’.
‘They are afraid from the prisoners’
Saying that the persecution on the prisoners should end as soon as possible, Hanife Akın said, ‘’They are afraid from the prisoners and therefore they attack them every day. What has been done is cruelty, but we cannot do anything either. The most fundamental human right is the right to health and it should be given to them. However, this situation is not implemented much in Turkey’’.
‘Everyone needs to stand up’
Melek Andiç, expressing her concern over the suspicious death of the prisoners, made the following call, ‘’Prisoners should be released before they die in prisons. Everyone needs to stand up. If we are united, we will have solved all the problems in 24 hours. I am calling out to everyone, let’s unite so that we can destroy this persecution’’.