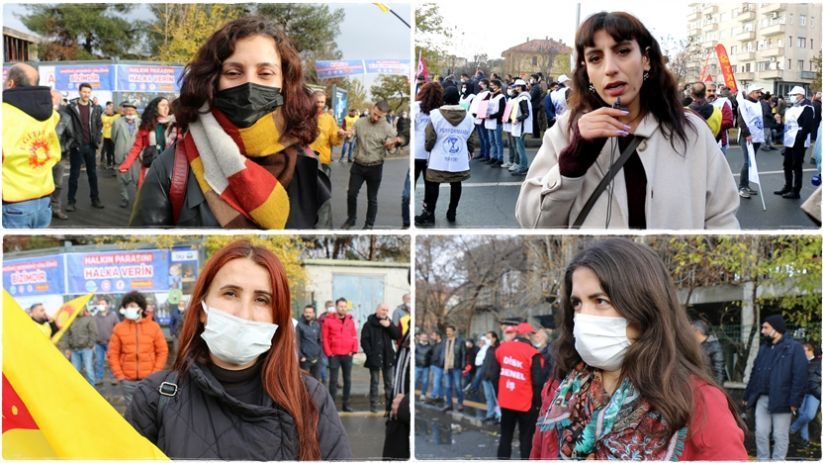 ‘Budget should be allocated to laborers, not to war’

Derya Ren - Sema Çağlak
DİYARBAKIR - Stating that the people are becoming poor day by day, the laborers expressed that the government should allocate the budget to the people and laborers, not to war and unearned income. The laborers stated that the government should give ear to the voice of the people and resign.
The economic crisis in Turkey was felt more and more every day. While the exchange rate was changing every day, the dollar, which reached 18 (TRY) on December 20, went into a sudden fall in the evening hours. The reason for this decrease was interpreted by economists as showing that interests were not ‘’raised’’ but actually ‘’rising’’.
On the other hand, as a result of the budget discussions held in the past days, the minimum wage was determined as 4253 TRY. While rises were made in many areas such as food, clothing, sheltering, technology and fuel, the increase in the minimum wage did not relieve both the people and the laborers.
‘Turkey’s future is bad’
Leyla, one of the laborers to whom we handed the microphone, stated that the government wants the people to be disciplined with hunger, and said that human life is not valued in the country. Noting that the minimum wage announced by the government will not be enough for anything, Leyla said, ‘’We do not see the determined minimum wage as an advantage. I see the future of Turkey very bad. Many people live in bad conditions. However, no action is taken towards this. No one has any more trust to the government’’.
‘Budget should be allocated to laborers, not to war’
Teacher Suna Akçı noted that the country’s budget is not allocated to laborers and said, ‘’If there is violence against women in a country, if we are becoming poor day by day, this is an indication that the course of the country is not good. We, laborers, state that we are not afraid in the face of this situation and that we do not obey. We say that the budget should be allocated to the laborers and the people. The budget should be allocated to the people and laborers, not to war and unearned income. The people also need to raise their voices in the face of what is happening’’.
‘The people protests situation’
Stating that the minimum wage announced by the government is below the hunger limit, Ecologist Derya Akyol pointed out that the foreign exchange figures are advancing at record levels with each passing day. Derya stated that people had to return home empty-handed every day due to the price hikes and said, ‘’Sellers due to price hikes have to change labels three times a day. The entire society is poor and unable to make a living. Because of this, the people took to the streets and protested these imprudent approaches of the government’’.
‘Government should resign’
Derya called on the government and said, ‘’The people have come to a point where they cannot afford their most basic needs. The government needs to intervene immediately to this situation. No longer, none of the government officials can fix this situation. They are making the situation worse every day. The state should immediately give up from war and ecological massacre policies. The only thing they can do now is to resign’’.
‘People have no trust to the government anymore’
Teacher Zehra Özdemir criticized the minimum wage being 4250 TRY and said, ‘’People have no trust to the government anymore. We do not know what else to say. Everyone is aware of the situation, but we are deceiving ourselves. We also know that this situation cannot continue like this. Everyone needs to stand up’’.