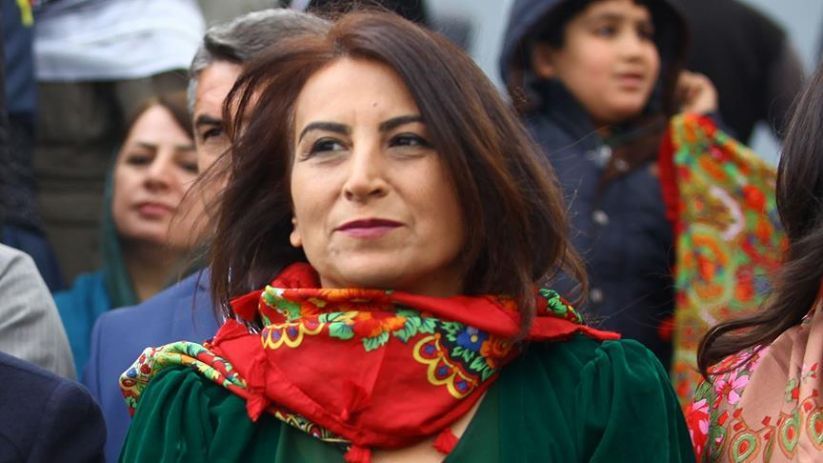 NEWS CENTER - Drawing attention to the health problems of Kurdish politician Aysel Tuğluk and calling for solidarity, 68 women’s organizations said, ‘’We once again call on all the authorities who have role in this unlawful process imposed on her to act in accordance with the law, science and conscience’’.
68 women’s organizations from Turkey and the region made a written statement regarding the health status of Kurdish politician Aysel Tuğluk, who has been imprisoned since December 2016. In the statement, it was pointed out that Aysel was the first woman to be co-chair in the history of the Kurdish political parties, and that she was the only woman MP who faced political ban after the closure of the Democratic Society Party (DTP), of which she was the co-chair.
‘Forensic Medicine Institute denied Aysel’s illness’
In the text of the statement, it was underlined that Aysel is also a lawyer, human rights defender and a politician who has devoted her entire life to the Kurds’ struggle for freedom and equality that will end in an honorable peace. Mentioning that Aysel’s efforts, struggle and stance in the life she devoted herself to have left deep marks in recent political history, the statement said, ‘’As everyone knows, she witnessed the racist attack and inhuman attitude against her mother’s funeral, and her experiences left irreparable damage on her memory. Despite the unanimously report prepared by the Kocaeli Medical Faculty Forensic Medicine Institute, which continued her treatment and examination process for months, a new report on the contrary was prepared by the Istanbul Forensic Medicine Institute’’.
It was pointed out that one of the Forensic Medicine Institute’s reports, which were contrary to medical science and continually concluded that political prisoners ‘’can stay in prison’’ despite their serious and deadly illnesses, was prepared for Aysel. It was also stated that the Forensic Medicine Institute denied Aysel’s dementia illness.
‘It is the responsibility of the state’
The statement continued as follows, ‘’The objection made by her lawyers to the ‘Supreme Board’ regarding the contradictory reports in question is not answered and is being an onlooker to the deterioration of her illness. As a politician who has fought against all kinds of violence against women for years and fought for women’s freedom, we object to what has been done to her today and demand the release of Aysel Tuğluk. In addition, in line with our demand for ‘Justice for Women’, we reiterate our demand for Tuğluk and all women who imprisoned like her for political reasons to regain their freedom. While there is a comprehensive board report stating that Aysel Tuğluk cannot stay in prison, it is the responsibility of the state, particularly of the Ministry of Justice, to persistently no fulfill what is necessary. Administrative and judicial authorities, who ignore the report of ‘she cannot stay in prison’, will be responsible for all the negative consequences that may occur regarding Tuğluk’s health.
Call for solidarity
We once again call on all the authorities who have role in this unlawful process imposed on her to act in accordance with the law, science, and conscience; We remind that Tuğluk should regain her freedom as soon as possible in order to continue her treatment in the required conditions, and we reiterate our call for solidarity’’.
68 women’s organizations which signed the statement are as follows:
Adalar Foundation Women’s Working Group, Adana Women’s Platform, AĞ-DA Gender Equality Solidarity Network, Alevi Women’s Union, Anatolian Women’s Movement, Women from Ankara Solidarity Academy (ADA), Ankara Women’s Platform, Antalya Women’s Counseling Center and Solidarity Association, Aramızda (Between Us) Gender Studies Association, European Alevi Women’s Union, Ben Seçerim (I Choose) Association, Association for Combating Sexual Violence, Datça Women’s Platform, DAD Women’s Council, Women’s State of Solidarity Association (DAKAHDER), Demir Leblebi Women’s Association, Democratic Alevi Associations Women’s Council, Democratic Alevi Women’s Union, Dikili Women’s Platform, Diyarbakır Bar Association Women’s Rights Center, Ekmek ve Gül Journal, Women from Labor Party, Eskişehir School Research and Solidarity Association-Gender Working Group, Monitoring for Equality Women’s Group-EŞİTİZ, Home-Based Employees Union, Foça Peace Women, Günebakan Women’s Association, Halkevci Women, Hatay Women are Strong Together, Peoples’ Democratic Congress (HDK) Muğla Women’s Council, Peoples’ Democratic Party (HDP) Adana Women’s Council, HDP Balıkesir Women’s Council, HDP Hatay Women’s Council, Hubyar Women’s Council, Iskenderun Women’s Platform, Izmir Women’s Solidarity Association, Women’s Solidarity, Women’s Party, Women for Women’s Human Rights – New Ways (WWHR), Women Writers Association,Women are Strong Together, Kağıthane HDP Women’s Organization, Karaburun Women’s Platform, Katre Women’s Counseling and Solidarity Association, Confederation of Public Employees Trade Unions (KESK) Women’s Council, Kırkyama Women’s Solidarity, Kırmızı Biber (Red Pepper) Association, Körfez Independent Women’s Solidarity, Mavigöl Women’s Association, Mersin Alevi Women’s Platform, Mimoza Women’s Association - Mersin, Purple Solidarity, Mor Sarmaşık, Muğla Emek Benim (Labor is Mine) Women’s Association, Muğla Women’s Solidarity and Consultation Association, Lawyers’s Association for Freedom Women’s Commission, Libertarian Democrat Lawyers (ODAV), Rosa Women’s Association, SES Equality and Justice Women’s Platform, Socialist Women’s Assemblies, Women from Workers’ Party of Turkey (TİP), Free Women’s Movement (TJA), Turkish Medical Association (TTB) Women’s Medicine and Women’s Health Branch, Van Women’s Platform, Van Star Women’s Association, Association for Solidarity with Wernicke Korsakoff Patients and Former Prisoners/Çukurova, Yan Yana (Side by Side) Initiative Women, Yaşamevi Women’s Solidarity Association.