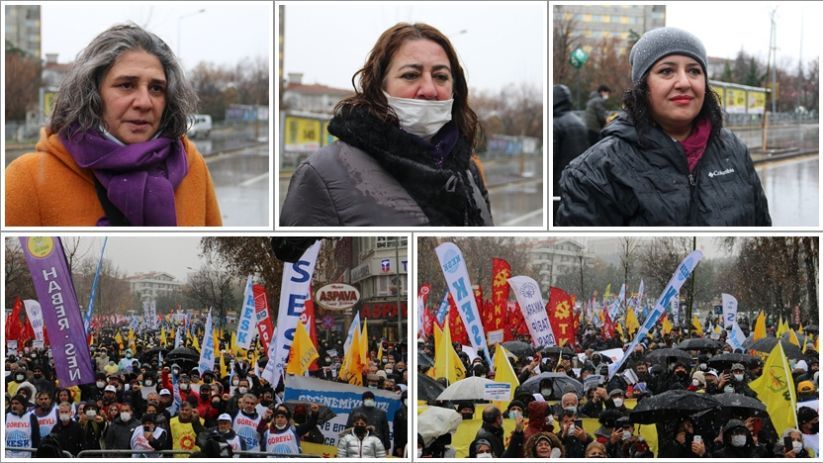 ‘We cannot make a living’ rally: Crisis of failure to govern!

Öznur Değer
ANKARA - Women, who participated in the regional rally held by KESK with the slogan ‘’We cannot make a living’’, emphasized that the government should change and stated that early elections should be held as soon as possible.
In the General Assembly of the Parliament, the 104.9 billion dollars 2022 Central Administration Budget Motion was accepted. The Minimum Wage Determination Commission, which held its 4th and last meeting on December 17 at the time the motion was being discussed, decided to increase the minimum wage by 50.54 percent and determined the new minimum wage as 4253 TRY.
While TRY continued to melt rapidly against the dollar, the poverty situation in the society decreased below the starvation line, and the dollar reached 17 TRY. Citizens who cannot make a living with the government’s policies raise their objections in the areas they are in. The Confederation of Public Employees’ Trade Unions (KESK) held regional rallies in Diyarbakır, Izmir, Istanbul and Ankara with the slogan ‘’We cannot make a living’’.
Gathering in Tandoğan Square in Ankara, thousands of citizens shouted out ‘’The government must resign’’ and voiced their demand for early elections. The laborers who participated in the rally after the rally made evaluations about the determined minimum wage.
‘This crisis is a crisis of failure to govern’
KESK Law Secretary Zeynep Korkmaz emphasized that there is a serious loss in all other wages, including the minimum wage, in an atmosphere where foreign currency has increased so much. ‘’Especially the purchasing power of the laborer has decreased. There are only the ranks of the unemployed and millions living on minimum wage. It is no longer possible to talk about wages. With the increasing expensiveness, you can increase the wage you want as much as you want, but the problem in the point of living is seen. Public laborers have made demands since the Collective Labour Agreement. Afterwards, it was stated that there would be improvements in this regard. But the obvious point is that we have faced with a new crisis. This crisis is a crisis of failure to govern. There was an economic crisis before, then a pandemic crisis followed, and then such an economic crisis that increased even more. The political and economic crisis is getting worse. Raise the wages as much as you want, they don’t make any sense. Today, we are living in deep poverty due to the melting of our wages against foreign currency,’’ Zeynep said.
‘The government should resign’
Emphasizing that the government should resign, Zeynep continued as follows, ‘’The government should give the start for early elections as soon as possible. Because the main problem here is the issue of trust. From investments made with public private cooperation, there is a government that has made its choice in favor of capital even during the pandemic period. Now this should be turned into laborers. A wage balance should be created for the favor of the people. We produce, we pay the tax. There is a tax cut from us, but on the other hand, many incentives come to the capital, such as tax reductions and tax amnesty postponement. The problem of people not making a living does not show that they will easily spend the winter. An additional budget should be issued as soon as possible. In particular, additional income security should be provided to the unemployed segments. Students cannot find a dormitory, they are hungry and have a housing problem. Students may stay somewhere by chance, but is that about all? That’s why we raised our voices from the field’’.
‘We want elections as soon as possible’
KESK Women’s Platform Term Spokesperson İlkay Ersus also expressed that the crisis will be very difficult to overcome. Pointing out that workers and laborers should not boast about the minimum wage determined, İlkay said, ‘’It is not a figure to be boasted about. Especially in the food sector, there have been loaded rises. We cannot make a living. The number determined by the people in the governance is a very small number. You cannot make a living with 4250 TRY. Students have dormitory problems, house and rent problems. The solution to overcoming the crisis is in the election. There is no other solution. We want elections as soon as possible’’.
‘The change is must for our country’
Reyhan Yalçın, the Organization Secretary of No.2 of the All Municipal and Local Government Services Workers’ Union ( Tümbel-Sen), emphasized that they cannot make a living and that’s why they are in the fields in the snow and winter. Drawing attention to the rallies held all over Turkey, Reyhan said, ‘’The minimum wage became 4250 liras, but it melted against foreign currency. We cannot see the beginning of the month with the salaries we receive. We cannot buy milk for our children. These are not empty things. Governments need to listen to the voice of the people. The change is must for our country’’.